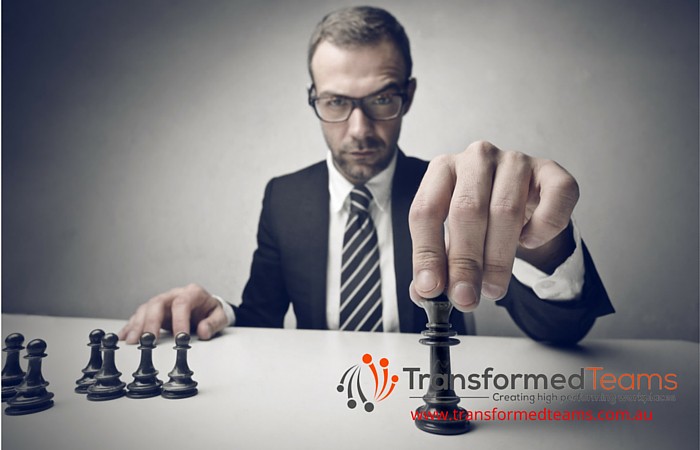 The trouble with not having a goal is that you can spend your life running up and down the field and never score.

Leaders know that teams who are unclear about their goal are as ineffective as water on a paint brush – going through the motions won’t make any difference to the end result.

Have you ever heard the term ‘Think like a CEO’?

I recently participated in a summit that was attended by one of the Atlassian Co-CEOs, Mike Cannon-Brookes. His company, Atlassian, is an Australian start-up valued at US$3.3 billion.

Mike runs a session with all his new recruits called ‘Think like a CEO’.

What is it that Mike Cannon-Brookes is trying to impart in this session? It is what most skills-oriented professionals don’t have: a broader perspective on their role.

By taking into account the context the organisation operates within, together with its specific vision, team members can become aware of what matters most.

It is knowing what matters most that enables teams to be successful.

These are the kinds of situations that can arise when team members are unclear about what matters most:

High performing teams usually clarify their version of what matters most by setting one clear vision and several long-term and short-term goals. In doing so they avoid a lot of confusion and wasted effort. Strategic decisions about where to spend resources can be made by team members, without requiring managers to be involved every step of the way.

Average teams, on the other hand, are content with unclear goals that seem to be heading in the right direction. These teams are unlikely to have SMART goals (Specific, Measurable, Achievable, Realistic and Time-bound), which are the gold-standard of clear goal setting.

Interestingly, clarity is not the only factor to consider when it comes to goal-setting. Pioneering research by Dr Edwin Locke in the 1960s showed that 90 percent of the time, specific and challenging (but not too challenging) goals led to higher performance than both easy and non-specific goals (such as when a broad goal is given, like “do your best”).

This research shows us that goals should be not only clear, but also specific and challenging. In other words teams need challenging SMART goals to see a real boost in performance.

Some teams find it difficult to set goals – their long-term goals and short-term goals seem more like a sponge thrown into a dark room than a nail hammered into the wall. This is often due to an unclear vision, in which case it is important for leaders to spend more time on strategy and arriving at a clear vision.

If that team has SMART goals that are also challenging they are set to achieve high levels of performance.

There is an inseparable link between goal-setting and workplace performance. Do your team members know what matters most? Or which questions do you need to ask to get greater clarity around your team’s goals?

I attended the Successful Manager’s Mindset workshop because I wanted to access Nina’s brain and the workshop looked the best for what I wanted. A key take-home for me was how important trust is as a manager. I’d recommend it to anyone who is having trouble with flexible working environments.

I doubted we could find somebody to help us make sense of it all. We met Nina at a teleworking event and decided to engage Transformed Teams as our preferred partner. They analysed the workflow of our virtual team, and made recommendations to improve transparency, communication and job standards. I recommend Transformed Teams to any virtual business wanting a more productive work environment.

I invited Nina to address a Rotary Club of which I am a member in the hope that she could instil a level of team work and collaboration within the committee structure. Nina gave an inspiring presentation and fully engaged the 43 members to the extent that she had them all participating in communication exercises with enthusiasm and a good level of humour. There were many questions to be answered at the conclusion of her address and Nina willingly spent extra time with those who wished to have…

I am delighted to write a recommendation for Nina Fountain as a keynote speaker. Alternating with her colleague Siobhán Hanley, Nina gave a plenary overview from a workplace perspective highly relevant to this week’s Education Leaders Forum Tomorrow’s Skills. This was followed by a high energy and highly interactive workshop activity which really engaged people and demonstrated some great distance communication lessons for distributed work teams in a fun/active manner. The audience was a c…

Nina Fountain gave us a really insightful presentation on managing distributed teams. Something that was reinforced for me, is that if one person in the team is located somewhere else, then the whole team is a distributed team. It can be easy to think of the staff not located with the manager as “distributed”, but the reality is that the whole of our business unit is distributed. This is not new for us. We have been working in this way for some time, but it was important to have time to refo…

Nina is one of those rare business leaders who lifts her head above the trench of today to envision the workplace of tomorrow. For Nina it is one of distributed work teams – a workforce that reaches beyond the restrictions of a traditional office environment.   What stands her apart from other workforce futurists is that Nina has developed tools and processes to assist individuals, teams and organisations to successfully transition to an impactful, more satisfying, new world of work.   I h…

Nina is highly professional, well researched and collaborative. Nina is an engaging presenter and facilitator, and she listens deeply to people’s input. In relation to building the workplace of the future, Nina is at the cutting edge of thinking and understands the commercial realities that organisations face and the need for agility in this dynamic market. Thanks Nina for the great work!

The team loved the team-based approach and we intend to adopt it – it’s a very powerful approach. We realised how important it was for the manager to feel supported to run a successful trial and embed flexibility to make it sustainable. Feedback about the trial has been so positive that we’re now in a good position to leverage off the success of the trial.

Nina really ‘got’ my business and where I am aspiring to. In a short space of time, she delivered a Diagnostics Summary, which is clear, detailed and specific to my needs. I now have a clear roadmap in terms of increasing the efficiency and effectiveness of my business with great tools to access as I progress. I will be definitely recommending Nina to people I know.

I thought it would be good to discuss how the staff could better work together and contribute to the mission of the organisation. There have been some recent changes within the organisation. I felt the Hour of Power session could help give us ideas to address and manage our internal culture and communications amidst the change. The team felt engaged around our Cancer Society business and we worked together to address what we could do to enhance teamwork. I would recommend the Hour of Power to ot…